↓ Skip to Main Content
Home › Blog › Why I Speak 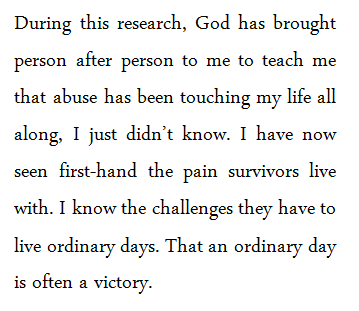 I came from a loving fundamentalist home and had a good experience at Bob Jones, graduating in the 1980s. I’m not an abuse survivor.

Sometimes people wonder why we care so passionately if we aren’t survivors ourselves. Here’s why I care:

About a year ago, I stumbled upon an article about Jack Schaap, Jack Hyles’ son-in-law and then-pastor of First Baptist of Hammond, Indiana, who was going to prison for statutory rape. Hyles’ sermons had always seemed devoid of scripture and full of himself, so I started researching him. Hyles apparently had a long-term affair with his tape secretary, in addition to misappropriating church funds. He was still the pastor of the church when he died and a statue of him and his wife still graces the church grounds. Multiple men from his church have been either accused or convicted of child sexual abuse, including a member of the Bible faculty of Hyles-Anderson College, Joseph Combs, and his wife. They are serving a 179-year prison sentence. Dave Hyles, Jack’s son, has ministered in several churches across the country leaving a string of mistresses in each of those churches, as well as First Baptist of Hammond. Questions surrounding the death of Hyles’ young step-son have never been sufficiently answered.

The list of other IFB pastors and youth pastors who have had sexual relations with women, teens and children is too extensive to list in this blog post. Jeri Massi has documented over a hundred cases of child sexual abuse by ministers or others in IFB leadership on her blog. She has stopped compiling them, but the abuse undoubtedly goes on. Note those hundred-plus cases are just for child sex abuse, not affairs. Three notable names in this pedophile category are Bob Gray (Jacksonville, FL), Bill Wininger (Michigan, Georgia) and Tom White of Voice of the Martyrs.

Documentaries and newspaper articles abound on the abuse (all categories) of children in IFB group homes. New Bethany Home for Girls in Arcadia, Louisiana has been the subject of an in-depth investigation by a reporter for nola.com. Mack Ford, the object of much of the investigation, recently died, so his accusers won’t be able to face him in court. Abuse at Hephzibah House has also been well-documented by Jeri Massi, yet this organization is still in operation and still supported by those in fundamentalism. Abuse has been alleged at other IFB homes, but when authorities attempted to investigate, the children were moved in the middle of the night to homes in other states.

Before the current Bob Jones GRACE investigation, GRACE was hired by New Tribes Mission to look into abuse allegations at their Fanda Missionary Boarding School. The final report is online and very disturbing. Association of Baptists for World Evangelism (ABWE) also hired GRACE to investigate abuse of their missionary kids. They fired GRACE before the report was released, but they never rehired them. What has come to light in spite of that is that their field doctor at their Bangladesh hospital sexually abused several girls on the mission field. He was sent home in the late 80’s, but ABWE continued giving him a pension and informed no one of his pedophilia. He returned to Michigan and practiced medicine for the next 22 years. When survivors began speaking out, Michigan revoked his license and ABWE hired an attorney.

Bill Gothard became an influential figure in conservative Christianity in the 70s and 80s with his Institute in Basic Youth Conflicts and Advanced Training Institute. In July 2011, a large group of professionals in various fields launched a website called Recovering Grace. All of them were raised in ATI. Many of them experienced physical, emotional, spiritual and sexual abuse in that world. Their goal is to rescue people still trapped in this system or support those who have left. They have exposed Bill Gothard’s emotional manipulation and sexual harassment of the teen girls and young women who worked at IBLP. To date, more than 40 women have come forward with very similar stories of his abuse of them.

The most disturbing allegations of child sexual abuse that I’ve read in my research come from Sovereign Grace Ministries. The lawsuit alleges a pedophilia ring with at least some of the men involved as leaders in the church and school. This is still making its way through the court system, because of problems with the statute of limitations and jurisdiction issues. Brent Detwiler, a former SGM pastor, is documenting everything concerning this on a website bearing his name.

A little closer to the Bob Jones world, Ernest Willis, a deacon in BJU board member Chuck Phelps’ church, raped a teen in the church, impregnating her. She was forced to stand in front of the church and apologize for her “sin” – Willis was also required to stand in front of the church and confess to adultery. The church was not told the two situations were related. The young woman had also been sexually abused as a child by her stepfather, Daniel Leaf. In 2011, Ernest Willis was convicted and sent to jail for his crime. Just this January, Daniel Leaf was also convicted and sent to jail. Chuck Phelps faced another case of child sexual abuse with a perpetrator named Joshua Budgett. Phelps performed Budgett’s marriage ceremony at his halfway house where he was living as a registered sex offender. Budgett was sentenced in 2013 to 30 years in prison for sexually abusing the stepdaughter he gained at that wedding ceremony.

For most of my life, I’ve lived in a bubble – sexual abuse was a distant, icky word that I didn’t understand and that didn’t really touch my life. During this research, God has brought person after person to me to teach me that abuse has been touching my life all along, I just didn’t know. I have now seen first-hand the pain survivors live with. I know the challenges they have to live ordinary days. That an ordinary day is often a victory. As I read and researched, I still thought Bob Jones was different. But as story after story came to me – some in person and some online – I realized Bob Jones wasn’t different at all. These survivors came from my orbit, my world. Their abusers came from my world. Their cover-up was in my world. 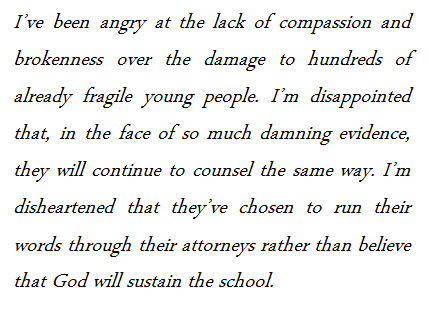 As an alumna of Bob Jones, I have felt disillusionment that the administration is not who I thought they were. I’ve been angry at the lack of compassion and brokenness over the damage to hundreds of already fragile young people. I’m disappointed that, in the face of so much damning evidence, they will continue to counsel the same way. I’m disheartened that they’ve chosen to run their words through their attorneys rather than believe that God will sustain the school, even if they say something that might be healing, but also admissible in court. I’ve been confused at how an educational institution could be so uninformed and naïve. And if it wasn’t naïvete, what was it?

So why have I chosen to be vocal? I don’t believe things will change until we make it uncomfortable for enablers to enable and difficult for predators to prey. It’s not enough to pick up the pieces of a broken life. We must prevent the breaking in the first place. We won’t begin to solve the problem of sexual abuse until the cover-up ends. Until men of integrity care more about righteousness and people that are hurting than their own reputation and money.

To read more about Sally’s journey of understanding, you can read her blog at Beauty Recognized.

9 comments on “Why I Speak”