Counseling after a fatal bus wreck 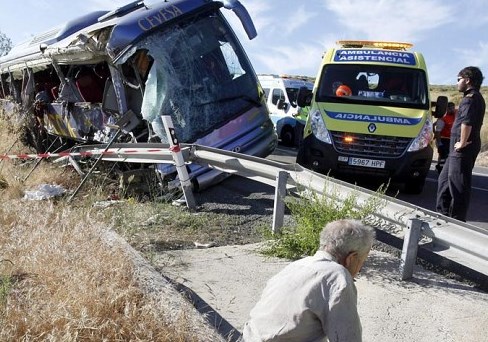 Jim Berg’s counseling represents what has been a systemic problem in the counseling practiced by key figures in the University and those who were trained by them.We have compiled some quotations from the GRACE report that focus specifically on two aspects of the counseling process at Bob Jones University:

(1) “The one-session model for complex cases of sexual trauma,” and

(2) “The use of intrusive, hurtful questions, sometimes in the initial session.” (both quotations from page 142 of the GRACE report).

“Dr. Berg was considered the ‘expert’ on campus in handling sexual abuse disclosures,” (page 142) and he has trained others in the same model for decades.

Below are some quotations from the GRACE report describing Berg’s counseling method. Below that you can read a graphic metaphor with which one woman describes this counseling method for survivors of sexual abuse.

Dr. Berg’s lack of formal training and professional supervision was evident in several judgment errors in the counseling he offered.  (page 142)

Dr. Berg’s counseling training videos clearly emphasize assessment over concerns about building safety. In the initial session, the counselor is instructed to ask a series of probing questions about the abuse and its after-effects as well as any contribution the victim may have made in the occurrence of the abuse. The focus is on identifying areas of sin that must be exposed and confessed. Dr. Berg cautions for the need to be caring, but abuse victims in a state of heightened vulnerability may feel judged and condemned by this process. . . .  (pp 78-79, underlines added)

While [victims] themselves believe they are wretched and contemptible, they hold out hope that the counselor will not reach the same appraisal and will have the skill and patience to convince them otherwise. . . . It is therefore not surprising that several of the abuse victims in the investigation described the BJU counselor’s probing questions about their behavior before and during the abuse, and the condition of their heart since the abuse, as spiritually and psychologically devastating. (pages 78-79, italics and underlines added)

From the Understanding and Biblically Overcoming Childhood Sexual Abuse training video: He explains to future counselors that to get to “the heart of the problem,” he asks sexual abuse counselees in the initial session a battery of questions. . . . ‘What were his reactions to you later?’ . . . ‘How have you handled this so far? What have you done? Have you had any physical problems as a result of this thing?’ . . .  I have to find out where there is guilt that they have to deal with. ‘Do you have problems with your memories or with your thought life? Do you have any moral habits that you need to change?’. . . (page 66 footnotes)

From the Understanding and Biblically Overcoming Childhood Sexual Abuse training video: So I am taking the problem situation and then from that I want to sort out what are the emotions that are involved here and we have talked about those. Is there anger and bitterness here? Is there fear here? How are they dealing with the hurt? Is there depression? Are there psychosomatic problems going on in their body here as a result of this? So I want to find out the effects and the emotions here. All of this I am doing in this initial interview just by asking them a lot of questions about this situation and about the effects on them. (page 66 footnote)

I want to find out about their behavior. . . . What kind of behavior has come out in their life now? What relational styles have they adopted as means of controlling their world? What kind of sexual problems are they having? If they are married, have there been problems there? Are they into any kind of sexual perversions here? What addictive behaviors are in their life? What self-destructive behaviors? When is the last time they thought about taking their life? . . . So I am just asking a lot of questions.” (page 66 footnote) [In the nouthetic world, many of whose proponents mock “listening,” this process is called “data gathering,” as in a scientific analysis.]

He further explains that it is important to identify what “heart” issues may exist [in an abuse survivor] that may need to be confessed and forsaken so that the counselee can “put off the old man,” have a “renewed mind,” respond in a Godly manner, experience emotional stability, and live a life pleasing to God . . . Dr. Berg explained in his counseling video that when he asks questions in a session, his intention is to aid a victim in determining whether there was any part of what happened that is legitimate guilt that needs to be confessed. (page 67)

Dr. Berg stated that he engages in a data-gathering approach involving questioning and listening to see what issues the counselee raises or brings to the counseling session. . . . “I really try to discern where God is at in their life and what field God is plowing. . . . As Dean of Students I was used to investigating [in disciplinary cases], so I did that and asked that list of questions. I am seeing that is probably more threatening than helpful. . . . My situation was not this long drawn out relationship where people can unfold things—for one thing I am a man and secondly my time is limited. But also my investigative manner probably I jumped into things quicker and probably made someone uncomfortable. . . . (page 65 footnote, italics and underlines added)

[One abuse survivor said], “His questions seemed to focus on what I could have done to cause it, why I wasn’t in church, etc. etc. I was the problem. That meeting cemented the thought that God hated me. This happened to punish me, and life would continue like this until I could find a way to please God enough. . . . It seemed to me that he believed the incident was justified as I was not considered spiritually ‘right’ with God. He didn’t state that it was justified, but he asked several questions to find out if there had been any cause—such as a previous dating relationship, flirtations, etc. Once he realized that there had been nothing like that, his questioning seemed to only be focused on what my spiritual condition had been like. To me, it felt like my not attending church and being anorexic somehow justified what had happened. . . . It seemed to me that he thought I deserved it by the way he questioned me. He did not show any kindness or compassion (from my perspective). It was a time of added humiliation, confusion, and shame . . . I felt sick and humiliated.” (page 70)

[Another victim said that in the first counseling session] Dr. Berg had asked her a series of “rapid fire questions” such as, “Were you drinking? Were you smoking marijuana? Were you morally impure? Were you sleeping with anyone?” The victim said she told Dr. Berg that she was 18 and at work during the incident and that before the assault she had only once held hands with a boy on a school bus. . . . Dr. Berg explained that the purpose of these types of questions is to distinguish between the guilt or shame that God intends when a person sins versus shame or guilt that is not from God but which may come from another source. The victim, however, reported that she left the meeting feeling devastated and hopeless. (page 71)

This is the response from an abuse survivor:

I was in a fragile place, very traumatized by a recent sexual assault, and not only was I not give hope, I was SURE that there was no hope and there would never be any hope for me. The damage of that experience deeply scarred me.

Trigger Warning. I want to paint an equivalent picture for some of you who cannot understand the concept of sexual abuse and cannot understand why this type of response is so horrific. This is a horrible picture, but it is the only way I can think of to try to compare what this type of counseling feels like. I do not hate Mr. Berg, and if he ever reads this, I would want him to know that I forgive him. I post this only for these teachings and practices to end.

Imagine that you are one of a bus load of children, and a driver with road rage causes the bus to go catapulting off a cliff. The driver and some of the children are killed in gruesome ways while you and the others are injured and trapped in the vehicle for hours waiting for rescue. Imagine how every second feels like an hour for you and the other children who have survived, who are broken and wounded yourselves, but are also trapped with friends, some of whom are horribly injured and others who are obviously dead.

Mentally, emotionally and physically, you and each of the other children would be enduring intense shock, grief, confusion, and terror. Each of those moments would be engraved deeply into your minds; but most likely in a confused, fragmented, pain-filled, mixed-up way.

Then imagine that you are finally extracted from the wreckage, and while you’re still reeling in confusion, shock and grief, a counselor sits you down.

“Did you know the driver with road rage from the past? Do you do something to make him angry and force the bus off the cliff? What was your relationship with him before? What were you thinking about when the driver who caused the accident crossed in front of the bus? Did you do anything to distract the bus driver to contribute to the accident? Did you contribute to other children distracting the bus driver? What were your thoughts and actions during the time the bus was catapulting over the cliff? Describe the fragmented bodies that surrounded you after you crashed. Did you sin in your thoughts during the hours you were waiting for rescue, perhaps in feeling fear or despair or even repulsion? Were you fully accepting of God’s plan as you sat looking at the remains of your friends’ bodies? Describe your pain, your agony, your despair, your anger, the confusion that you felt as you waited for rescue. Have you thought about the accident since then in any way that isn’t fully accepting of God’s will? Have you felt any feelings of resentment or bitterness against the driver with road rage who caused the accident? Have you experienced nightmares, which are a sin brought about by thinking about the accident during the daytime?”

Imagine experiencing this “shotgun” approach to counseling, all conducted in one session. Wouldn’t it feel like you were trapped all over again in the accident?

Can you imagine what it would be like to then be handed a list of Bible verses to memorize in order to “get over it”?

Can you imagine the despair and retraumatization you would feel?

2 comments on “Counseling after a fatal bus wreck”

2 Pings/Trackbacks for "Counseling after a fatal bus wreck"